You know how it feels to just want a snack.

Ree Drummond made that snack on this morning's episode of Pioneer Woman. Barely finished with breakfast I became obsessed with how quickly I might be able to get my hands on that snack.

So in rapid rehearsal, we got out the chocolate chips, flour, granulated sugar, brown sugar, vanilla, and butter (so it would be room temperature).  We lined up the flour, salt, and baking soda next to an assortment of measuring cups and within reach of the Kitchenaid mixer.

We ran to Target for eight ounces of bagged perfection... 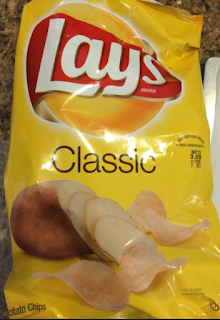 And then we went to town.

Half butter, half shortening (the secret)
brown sugar, white sugar


Pause -- you think you know about this snack, don't you?  Yep; I did too.  I know all about this one. Could make it in my sleep.  But, that Pioneer Woman...you know she doesn't like to just hang with 'standard'.  She likes to make snacks homespun.  And hearty.

So, the next step invited us to get out a gallon-sized baggie and pour in the chips.  All of them.  (Well, except the handful we snitched for two reasons: a) because we do not buy chips at our house, and b) because we couldn't wait [refer to former reason]).  Then, we closed it up and took turns crushing them to medium-sized bits with the first little and smaller bits by the second little.

And then we poured half of them into the batter.  Half.

Note: I tasted the batter at this point just to ensure we were on the right track.

Then, we used the cookie scooper to make nice, rounded spoonfuls that we plopped into the remaining clump of crushed chips and rolled them around before a toasty fifteen-minute trip into a 375-degree oven. 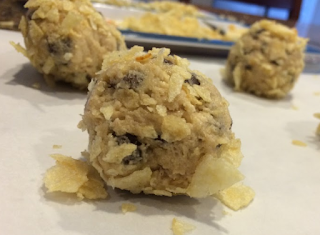 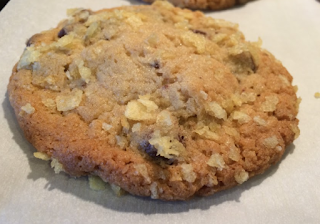 The downfall to this recipe is what happened next -- waiting five minutes to remove the cookies from the baking sheet.

But oh -- with one bite many details disappeared
time, space,
propriety, objectivity
restraint, concepts of calories and weight
and were replaced by golden, crispy sweet-salty goodness, melty chocolate chips
in ooey-gooey batter.

I texted my neighbor who responsibly spent the day working in her yard.  Want a chocolate chip potato chip cookie?

We sat on the front doorstep and devoured that snack.

Email ThisBlogThis!Share to TwitterShare to FacebookShare to Pinterest
Labels: SOLSC 2017

Hi! I'd love to hear what you are thinking right now, so please take a sec and drop me a line. I'm so glad you stopped by today -- thanks a billion. :)